I decided to just start from scratch. The tiles were winning, and I was losing, and I threw them away and felt better. 🙂

So, I’m going for a ‘mountain pass’ kind of look. This particular diorama doesn’t have a title set in stone yet, since I had to change the setting, trying to decide if “Uninvited Guests” works still.. Leaning towards no. 🙂 But I’m going to do some greenery and some more rocks, and I’m so excited that I’m making progress!!!! 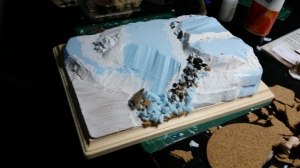 This is the rough arrangement I’m going with. Skadi is still on her painting setup (she is big and pewter, my normal setup for bones doesn’t work for her), but she will be on the top layer casting angry faces at the giants. 🙂

I also have to sand and seal the plaque still, but I did it first last time and it made me nervous the entire time I did anything with the actual diorama, so I’m going to do that last this time… We’ll see which worked better. 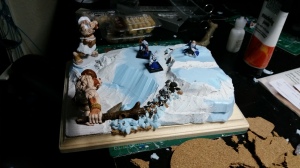 Anyways, sorry about the poor lighting on the pictures, I grabbed them this morning before I left for work, didn’t really take much time on them.

Changing subjects, I didn’t do the Monday Miniature this week. It was AIna the Valkyrie, and when I painted her a few months ago, I didn’t really like the way she turned out. I plan on working on the Spirit of the forest this week for the next one though. And I’m really excited about the Pathfinder red dragon, I haven’t decided what color to paint him yet. I’ve seen him blue and red and green, and he doesn’t work as a black dragon without some optimistic sculpting on my part (not a skill I have perfected), so I’m just not sure. Considering I have already painted one red dragon, and we have the colossal one from WOTC, I’m not crazy about another one. Not that there can be too many red dragons, but I want to try new colors!

Well, that’s all for me. I’m just painting and basing and getting all my wish lists and stuff together for Reapercon!!!