My buddy Seej asked me to do a review on Silver Tower, so I took some pictures and here I go! Don’t judge me that my minis aren’t painted yet. They’re primed and assembled. So there.

Silver Tower is a miniature board game that is made my Games Workshop. It retails around $100 which made it a lot easier to buy than monsters like Kingdom Death(sorry…). In it, you and up to 3 other players are heroes that are adventuring in the Gaunt Summoner’s Silver Tower. The entire dungeon is created as you go through it, and there are several options for setup along the way. There are 2 books you use to determine what happens throughout your journey, which eliminates the need for a DM. You can have one player act as the DM if you want, but there’s no need unless there are 5 of you playing.

Characters are pregenerated, and I’m sure there will be tons of new ones. ( We have already bought 8 more champions since we bought the box set.) You pick them out and use the character card that they come with, or you can use your tablet/phone. It’s pretty easy either way. 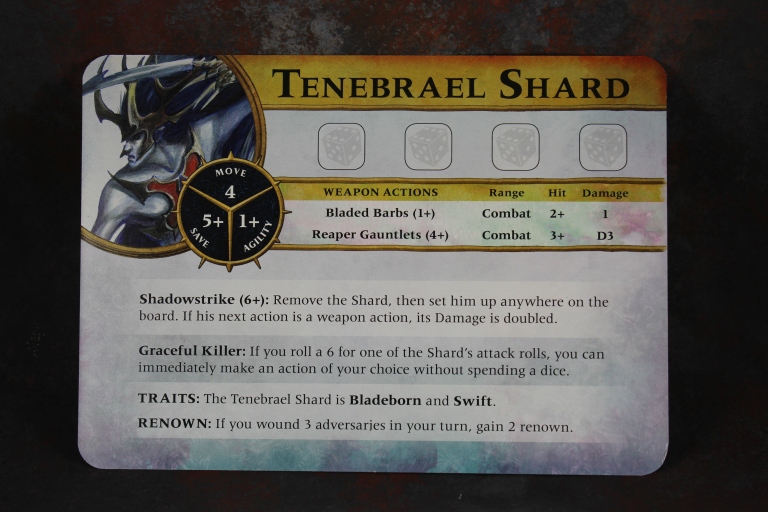 The characters are pretty easy. The whole game uses nothing but d6s, do you don’t have to have a ton of extra anything. It works a lot like actual warhammer, roll a d6, they have a 4 up save, blah blah blah. Examples are made using the Tenebrael Shard. I roll my 4 action dice, then I use one to move up to 4 (my movement speed), and a die with a 4+ to use my reaper gauntlets. I can do that again if I have a die with 4+. When I run out of dice, my turn is over. The only exception to this is the runemarked player (goes around the table) rolls dice at the beginning of each round. These dice can be used by anyone, so I could grab another 4+ die to reaper gauntlet another guy.

When you read through the rules at the beginning, it explains the cards and how to use them. Long story short, you make piles of cards based on what ‘room’ you want to generate, and then they tell you how to set it up, if there are any special rules, and what page to read to determine what happens/who you fight.

This is what it looks like when you’re playing. You have cards and tiles and miniatures. The tiles ‘disappear’ after 3 rooms, so you never have to worry about losing an entire table or something like that. Your goal is to make it through the entire dungeon to defeat the gaunt summoner. There is treasure and all kinds of fun along the way. It isn’t a terribly difficult game to play, but it does take a while. For example, we play d&d every Sunday from around 10-6 ish. One month, we played this every Sunday instead, and it took us about 4 weeks to finish. We enjoy our time, so we weren’t just hacking away and rushing it, but we’re no slouches when it comes to games. 😉

So, that’s how it works, ish.. There’s a few mechanics that really aren’t worth getting into. At the end of the day, we really enjoy  playing it. It’s not a table-flipping kind of game, it’s not competitive (unless you want it to be), and it’s a lot of fun since you never get the same room twice. I definitely recommend it to anyone that is into board games that take a while, but are fun. And at the end, you get to kill a big ol Tzeentch summoner! There are pink horrors, blue horrors, Ogroid Thaumaturges, and all kinds of monsters.

Seriously, definitely worth it. If you’re not sure, come on over and join us for a session! Let me know if you have any questions!

marinealrose@gmail.com
I would be happy to talk about any commission work, or answer any questions you may have. Feel free to drop me a line!
The Introverted Hermit