My friend Dr. Wong helped me pick my new domain name… You like it? He has all kinds of plans for me to make videos of pewter cars, transformation videos, all kinds of stuff! It’s probably not going to happen though….. lol.

Anyways, I wanted to paint a beholder, but I didn’t want to shell out the money for the giant GF9 one, and I didn’t like the look of the big reaper one… So I improvised! If you buy the parts for the mini beholder, and the eye stalks sprue you can put them together! The holes on the beholder actually match the diameter of the eyestalks pretty perfectly. I just drilled a little hole for the stalk to pin itself in, and we were ready to go! 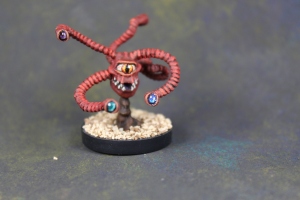 Isn’t he adorable!? He’s a tabletop mini, which is a lot of what I’m working on right now, but I think he turned out well! I tried to make the eyes look like eye/gem combos. The hubs wanted a pupil on the big eye, but none on the little eyes. I had a spare tentacle from the melt pile, so I just added one more. 🙂

I worked on the basing for my really cool fish guy… But I hate it. Showed the hubs, and he loves it. Story of my life. So I’m gonna finish that up tonight, and I’ll post pictures.