So, it has been a busy couple of days… in the last 48 hours I have had 6 hours of sleep in 3 different naps. So, no judging my rambling. Let me explain, then  I show you my MAGNIFICENT WIP that I finished.

Monday I worked days, it was weird, there was sun. Tuesday I stayed up all day and hung out with some of my awesome friends I haven’t gotten to hang with in a while. Then I stayed up all night because I had to work Wednesday night. So I took like a 2 hour nap, then got up and PAINTED!!! A lot. Then I got the Hubs and the Midget up for work/school (respectively) and laid down in bed around 0800. At 0930 I got a call that my Grandma (who passed away Monday)’s viewing was hastily scheduled, and would be at 3pm today…. So then I call/text everyone I work with to see if someone can cover me, and at about 1030 it was squared away that someone would. YAY! But then I couldn’t sleep. So that’s why I’ve been awake for a really long time.

Now, Yephima/Neptune. I sat down to make a WIP (work in progress) and ended up finishing her in one sitting. But I took pictures, so dammit, I’m posting them. 🙂 First, this is what she looks like done!! 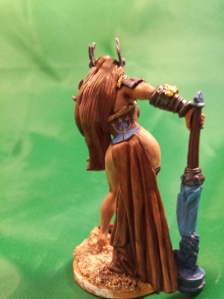 She was interesting to paint. I decided to try a few techniques I hadn’t done before, so bear with me. First of all, darklining. It’s exactly what it sounds like. I liked it actually, don’t know how it would work with a 25 mm mini, but for this 54 mm, it worked great! I got a little excited and painted a leg before i remembered I was supposed to be taking pictures. meh. 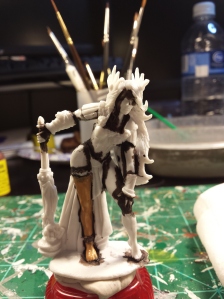 Then, I painted her skin, and her dress, then the metals and hair. This was a lot of pictures, so I’m somewhat streamlining. She’s so pretty!! I didn’t like that all the others I had seen had a lot of blue skin or green hair and whatnot. The mini is supposed to be a cloud giantess, but she looks a little sinister to me for that. I decided she was a ‘equatorial giant’ at first, then that she would instead be a water goddess, hence the Neptune name. (You can see it later, but that whammer she’s got is a lady upside down… go look at your miniature, I’ll wait.) 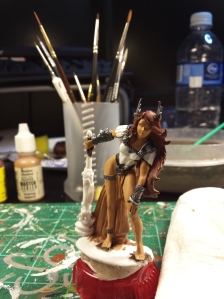 Now, I decided to do something a little different with her, another first! I added netting to her skirt. It was a lot more work than I thought it would be, and it took considerably less fabric than I thought it would. I had to go dig through some old drawers and find an old set of fishnets for that. (seriously, how do I still have Hot Topic fishnets?!) I painted it and attached it! Oh, and her whammer has it’s first coat of paint too.. see the lady?

Here’s another relatively new thing for me to successfully add, freehand! I thought it turned out really well! I knew I wanted something nautical, but not a compass. Looks like only 3 steps, so stressful… 🙂 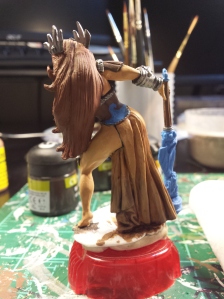 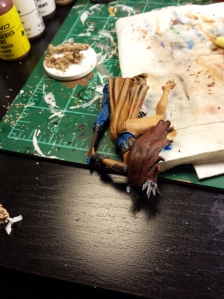 Then I pinned her like I should have at the beginning. She has really shallow feet though, so I decided to try something different and use pin-backs (for making a lapel pin) we bought during renfest. They worked great!!

So, after this it was a matter of attaching the net, highlighting and painting the jewels on the whammer, and finishing everything up!

And then she was done!!! All in all, about 9 hours of painting to finish up a great mini. This was fun to put together, hope you enjoyed it!!! Will post some other pictures another day. I may or may not have received 10 new reaper minis today… I can stop any time I want. 🙂

Fail and Learn with Me!