I actually had about an hour today while the Tiny Overlord was napping, and I got some painting done! Just to recap, I have less than 3 months until I graduate, and 4 weeks of clinicals left!!! So close!!!! I’m really hoping to be able to crank up my painting once I’m done with all that. We shall see…

Onto what we’re here for!!! I decided that if I want to really step up my game, I need to start doing what the grown-ups do. So, I’m testing some skin tones on throwaway minis before I try it on the big, expensive, important one. I’m going for an efreet/genie/demon blue skin, and a golden tan one. They’re both WIP, the blue only has the first layer of highlights, and the golden tan is literally just a basecoat.

You might notice that I’m trying the thing where you prime them black at the bottom, and work up to white at the time. Kind of a cheat zenithal setup. I like it so far. I never liked the prime black and drybrush white primer method, so I thought I’d try this. So far, I’m a fan. The undercoating kind of sells the effect and keeps the face from looking dull (so far).

The other thing I’m super excited about is that I think I may have figured out some highlighting stuff. It’s not something I can say I completely grok yet, so I don’t want to try and explain it. But if you look at the green on his belly, I think it’s starting to look like something I’m proud of. The black and white shot is for contrast, so you can tell that the shadows aren’t just from the light. I painted those!! lol. It is a mixture of wet blending and then working with some texture to fully blend it. I’m looking forward to trying it again. 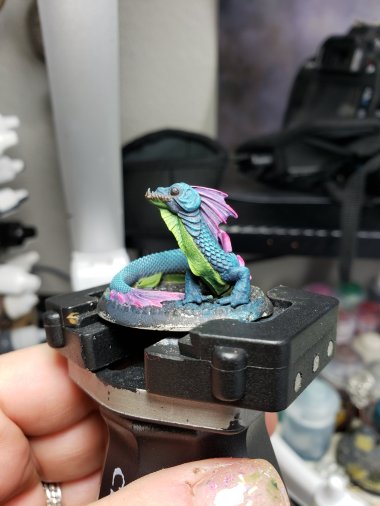 During the process today, I tried some of my new Pathfinder paints, and Ezren blue is my new favorite blue for all time. I love him. I will call him squishy and he will be mine.

I hope y’all enjoyed yet another episode of my rambling with some pictures thrown in for spice! I’m hoping to have more in the near future.

Let me know what you think!!!