Wow! It’s been a week since reapercon! I almost feel like I’ve caught up. lol. We had to hit the ground running when we came back, and I just haven’t had time to post. Lets go!

Obviously, we had an amazing time. We left the Tiny Overlord with Grandma and had a GBO and Mommy only week.

It was pretty awesome to catch up on our sleep, but we were missing that boy by the time we got headed back!

We got checked in to the convention and got all our goodies, but our room wasn’t ready. We were fine just to hang and meet up with people but the girl at the desk was very concerned about our wait, so we ended up getting a suite! It was super cool, and had free snacks and stuff. 🙂

This was our initial haul from the VIP swag bags and the other bags of goodies we got. (We go hard when we go. lol) 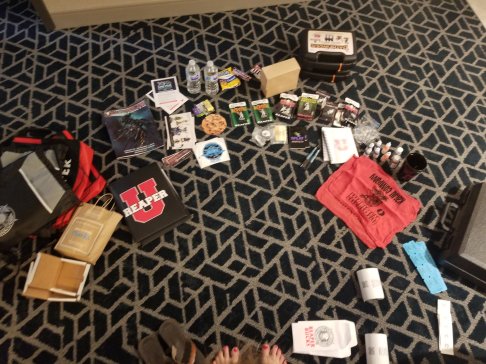 We got 2 of everything, so there were some swaps of different items with other people as well. I ended up with a bright pink cup and a black one, we traded one of our purple sets of pizza dungeon dice for a blue set, and we ended up with a complete set of the pathfinder paints. Those are now GBO’s paints. That way we don’t have to share. heh.

We did the pizza meet and greet, then started classes. I finished all my entries before we left so I could just spend the time hanging out and enjoying the con without stressing.

As always, I had a ton of pewter melt. I ended up carrying over some 40 ounces of credit. Always good if I find something I can’t live without for next time! Also, I like helping out friends that don’t have as much melt. I always end up grabbing something for someone.

These are the goodies I got from Bob Ridolfi’s diorama class. I really enjoyed it! He’s a great resource for all kinds of composition stuff. And he sculpted some AMAZING drunk zombie pirates for Bones V. I forgot to take a picture, but I will be buying them. 🙂

This is my super fancy Bones V golem. Michael Proctor had a shaded metallics class and he had some of these made up in resin! I’m super excited about him. Metallics are one of my weak spots, so I need the practice. I decided that I’m going to use each part of his armor and paint it differently to work on several different techniques. I may or may not have a second one to paint up super pretty if I can decide on a technique I really like. 😀

We did some shopping in the vendor hall, and we got the Tiny Overlord some (more) dice. That boy is going to have more dice than me here soon…. But these guys were big! Gotta keep him safe! 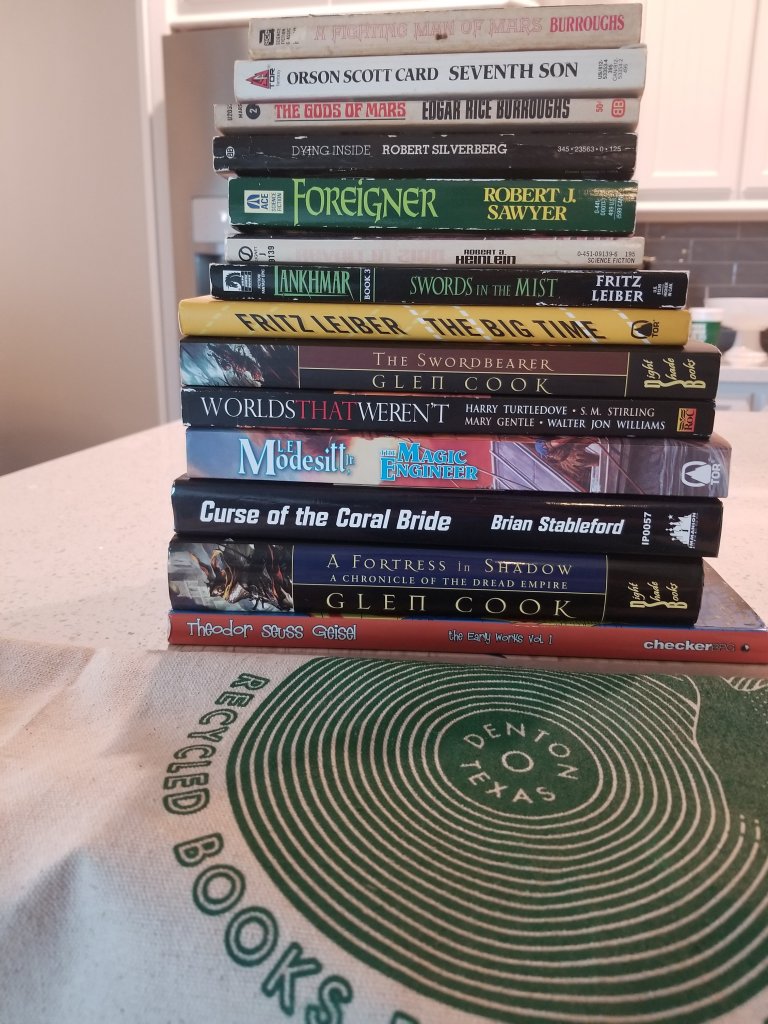 Some of our local friends told us about an amazing book store in the old opera house in downtown Denton. It’s called Recycled Books and you should go. Now.
We loved it. We got a few minutes to chat with the owner and she was a really cool lady. I can’t wait to go back again next year! 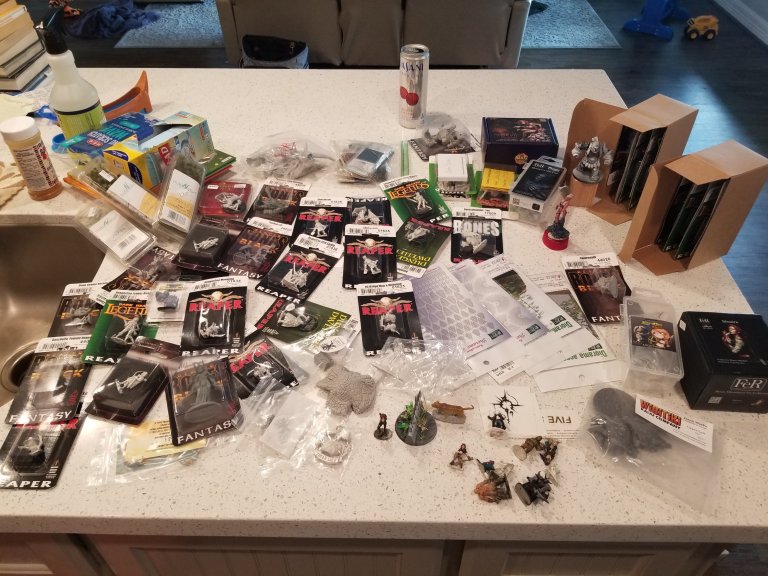 This was the end result of all the minis we made it home with. A few busts, some paper plants, a bunch of bones. Hangar 18 is going out of business (we talked to the owner and his wife, and they are actually doing really well. They run another business that is really taking off and they don’t have time for both. We are really happy for them, but we’ll miss going though their booth; it’s been a favorite of mine for a while!), and they had a rolling sale. Every day they had a higher percentage off. I didn’t get them in the picture, but I got a 6 pack of new backdrops. They have the best ones, and my ones from 4 years ago have not been treated kindly, so I needed more. 🙂

Alright, onto the competition!

Diorama Entry: the Legion of Justice and Caeke in Caeke, Interrupted

I got a bronze on this one. ( I didn’t get a picture of it, but it’s on a lazy susan) I’m not gonna lie, I was a little frustrated with this one. I’m not sure if I posted it or not, but I was within a fraction of a point of silver on the Artificer’s Guild online competition, and they suggested I change the basing. So I took them off their original base, re-did it completely and added a few more details to my little furry friends. When I spoke to my judges after the competition I was told that they didn’t feel like it “told a story”. My intention was that they were at a picnic and it was interrupted, so they were ready for attack. But, it is what it is! I’m happy I was able to get more feedback, and maybe I’ll nail it next time.

Open Entry: The ‘Mere is a Cruel Mistress

She got a silver!!!!!! I spoke to Erin after the judging and she said that they decided to award silver based on the level of difficulty of the deep resin pour (actually in this picture it looks like the resin isn’t level, but it is… I think a magnet on the bottom came loose…. weird.), and the modifications I did to each miniature. I had a cool little book printed up that went through my step-by-step process. I actually used a lot of the stuff from here to make that up!

Isn’t he cute?! I actually entered my Archivist demon in this category too, but they liked this guy better. 🙂 I’m really happy with him. Some feedback I got was to embrace the chibi style. Buttery smooth blends aren’t really the way to go to on these guys, they like the hard lighting and whatnot. So I’ll try that on my chibi busts and whatnot that I bought for next year!

This was kind of a last-minute addition. She just needed to be painted, and I needed a Paint it Pink entry. 😀 I did not sculpt this, she’s from Maow Miniatures. I did add the fake lashes though… lol

GBO bought me a few busts, so look forward to seeing them in the near future. He maintains that my skill is in painting and not diorama building, but I JUST WANT TO BUILD DIORAMAS GOOD, Y’ALL! heh.

Anyways, I’m always happy to hear what y’all think! Hope you enjoyed a little look into our trip! Super big thanks to all our friends we got to see! We’ll be there again next year and we can’t wait to see everyone!

2 thoughts on “Reapercon Wrap up!”