We went on a vacation, and had so much fun!!!! I love Fredericksburg this time of year, and we took the jeep rock-crawling, and went on a wine tour, and just had a blast! Then I came home and painted. So, this is the Hubs’ mini for our current D&D game, Kos, Archon of the Flamebringer. He has 2 fire mephits and a magma mephit named Snap, Crackle, and Pop and sets things on fire with his ranseur. 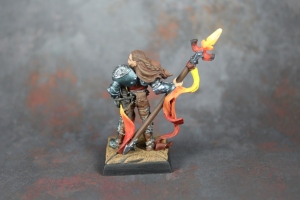 I think he turned out pretty well! I am still working on getting my blending to be grade A, so some more grinding is required on that. But I find it easier to blend on these kind of surfaces than I do on folds of cloth, interestingly enough.

I also tried out my new ‘glazing medium’ I bought a few weeks ago, and I definitely prefer my matte medium for thinning. The glazing medium gave it a very glossy finish, which was nice for cleaning up some of the chalky texture I always end up with on yellows (doesn’t matter what I use to thin them, they are just chunky paints), but ultimately not something I will use overmuch.

I sculpted his base from greenstuff, and I was fairly proud of myself. Hubs wanted him on a flagstone-esque base, so I decided to see how well I could sculpt. Not too shabby. Also, I didn’t let it dry completely before I kind of stuck him down into it, so that made it look a little more natural I think. 🙂

I had kind of an epiphany with this guy about competition minis. Choosing the right miniature is just as important as your paint job. I had a really rough time getting to his left eye, which made it not nearly as good as his right eye. It was interesting to me that I had never considered that part of competing before. I was focusing 100% on technique and excelling at painting whatever, and part of that technique is getting a miniature that lends itself to being painted well enough to warrant competition. 🙂

Anyways, hope everyone is giving Reaper ALL their monies right now so I can get Tianot, and I’ll be finishing up another DS mini this evening. Her base didn’t want to dry enough for me to paint it and take pictures last night, so she’ll have to be later. Until then!

marinealrose@gmail.com
I would be happy to talk about any commission work, or answer any questions you may have. Feel free to drop me a line!
The Introverted Hermit